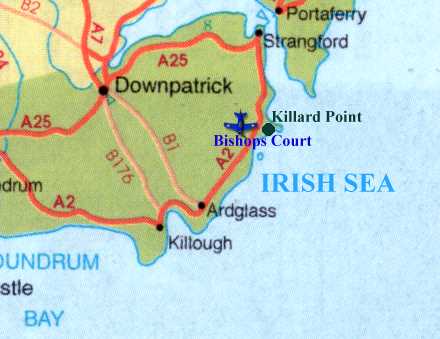 Ulster Radar was a JATCRU (Joint Air Traffic Control Radar Unit) located at Killard Point, part of the RAF Bishopscourt complex, on the East Coast of County Down in Northern Ireland. Ulster was one of a number of JATCRUs around the UK whose civil task were to provide area radar cover for the then three area Air Traffic Control Centres (ATCCs), Scottish (formerly located at Redbrae, Prestwick), former Preston, and London (formerly at West Drayton). JATCRUs were created to provide this area radar cover as the ATCCs did not have radar facilities and were purely proceedural control centres. The JATCRUs were located at RAF units using civil staff and radio communications but military radar. Other JATCRUs in the UK included Sopley near Bournemouth, Lindholme in the Northwest of England, Border in the Northeast of England and Highland in the North of Scotland.

Ulster Radar's military role was as an area fighter control unit and Air Defence unit to protect the UK from attack via the Atlantic during the cold war. It's civil role was area radar control of aircraft in the upper airspace (above 25000 feet) to ensure aircraft crossing the Atlantic were seperated at at their assigned levels before they arrived at the Oceanic boundry when flying to America and seperating and ensuring aircraft were at assigned domestic levels as they left Oceanic airspace after flying from America.

Ulster Radar had two different radar types available for operational use. A type 80 that was located beside the ops room on -site at Killard Point and a type 84 that was located on the airfield of RAF Bishops Court. In addition a number of height finders, or as they were affectionaly called noddies due to their vertical up and down motion, were located on the unit.